Posted on September 4, 2018 by Inspiring Exhibitors Leave a comment

In the scorching heat of a September Sunday we decided to spend the day inside amongst the delicious sights, smells, tastes and discoveries of Speciality Fine Food Fair – and what a treat it was! Attracting decision makers and buyers from retail, wholesale, hospitality and foodservice the annual show plays host to hundreds of speciality producers of the finest food, drink and services in the industry! It’s one of those days where you just hope that amount of steps you do balances the copious little nibbles you devour as you walk around!

So what did we see that that gave us some inspiration from this years show.

One of the big trends we noticed was the very clever use of wallpaper or plain vinyl to dress shell walls, with picture frames hanging from them displaying images, messages and calls to action. Low value dressing and with a flexible method for changing your message at every show depending on who and what you’re trying to engage. Genius! And not one exhibitor made it look cheap, although it was probably among the lowest cost stand design on show.

This example from PureCup of South Africa was stylish, reflective of the brand and easy to understand: 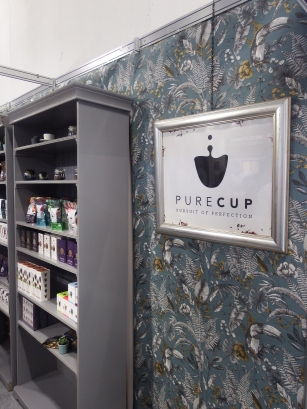 Granny’s Secret  fruit spreads had a similar idea but instead of using wallpaper applied simple wood panelling to the walls of their stand, overlaid with framed pictures of fruit and family to bring the natural cues of the brand through into the design:

DON’T BLOCK ME OUT!

We often talk in workshops about removing as many barriers as you can from your stand to create an open and inviting space.  The big temptation especially at food and drink shows is to create a huge sampling counter, which might make it easier for you logistically, but immediately creates a huge block between you and a visitor. We bumped into A Little Bit who we were delighted to see had moved their counter to the back of their stand (after much debate between themselves) so they could get up close and actually interact with visitors who were interested in their products. Putting the counter at the back of the stand also avoids ‘Drive-By-Sampling’ from visitors who are just interested in the number of treats they can consume without any real intention of buying from exhibitors (Tyre Kickers if you’ve been on one of our workshops).

Even with the best planning, preparation and operations trackers, things will always go wrong at exhibitions, it’s just the way it goes sometimes. The team from Lowlander Beer in Amsterdam found themselves in just this position when an unnamed airline misplaced one of their bags with the vinyl skins in – not ones to be defeated they simply found someone locally who could print some new ones in 12 hours. And that was on-top of building their amazing stand from scratch which featured artificial foliage and intricate wooden signs (that they just decided to knock together once they’d arrived on site).  Click here to check out their Facebook post for the time lapse video of them building their stand. 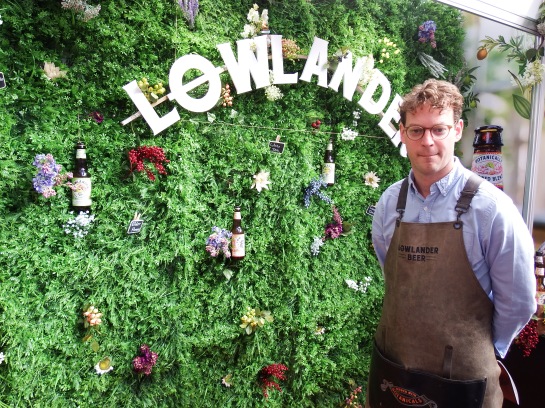 It might be a phrase heard more often in the North East, but it was executed brilliantly by Terry’s Patisserie on the Food & Drink Wales stand. Trade shows can be an overwhelming place for visitors, who have an idea of what they’re looking for but aren’t sure if they are what you’re looking for.  We often advise clients if you have someone specific you want to meet e.g. European distributor, Travel Retail Chain, then ask for it and it will help visitors find you. We once worked with an Irish producer who couldn’t understand why in 4 visits exhibiting at the same show he hadn’t yet found a UK distribution partner. The 5th time he exhibited he simply put up a sign saying ”UK Distributor Wanted” and guess what the outcome was. Terry’s Patisserie had a sign on their stand asking for what they were looking for, along with a young but incredibly engaging staff member and delicious cakes – the perfect recipe for success.

Often exhibitors can fail to engage with visitors because they think of selling their product or service in isolation without showing how it can solve a problem or add value for a customer. We were really impressed by Cottage Delight preserves who had used an in-store display unit as part of their stand to show how retailers could sell-through their products in store and create a point of interest for shoppers. With branded gift bags and a 3 for £5.00 multi-buy retailers could create a unique gifting option that might not have been immediately obvious – in terms of building trust with visitors, this clearly shows that the exhibitor cares about how their product continues to add value for a customer beyond the sale. 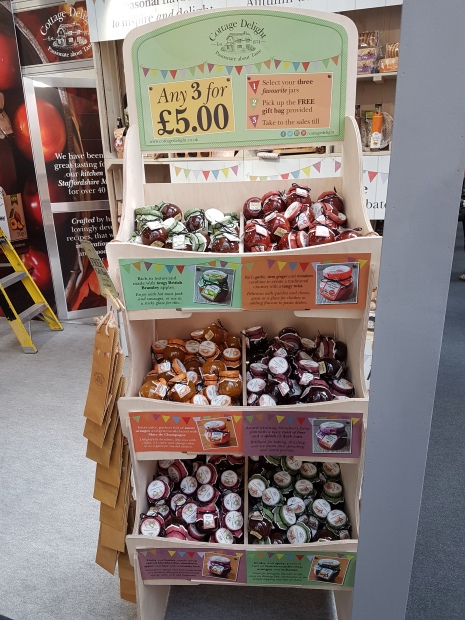 That’s just 5 examples of what we thought were new, interesting or best in class exhibitioning ideas that will hopefully give you some inspiration as you wrestle with your own trade show troubles.  Of course, it wasn’t all engaging stands and solid customers propositions – as with all shows, we witnessed eating and drinking on stands, visitors being ignored by staff more engaged with their mobiles and laptops and on one national stand a whole sales team crowded round a mobile, with a bottle of red, enjoying the Italian Grand Prix. Unfortunately these exhibitors are more than likely to be the ones complaining to the organisers this week that they ‘didn’t get any leads and it just wasn’t a very good show’.   As we often say to clients, ‘bad shows’ go out of business very quickly, poorly prepared exhibitors seem to stick around for a little bit longer!

If you’ve been inspired by anything you’ve seen in this blog why not drop us a line and share what you’ve changed about your planning, implementation or evaluation as a result – we’d love to hear from you!

The team behind ProExTra can also help you with the following services: